One of the greatest advantages of git is that it is much smarter at handling conflicts between different contribution to the same repository. In particular it automatically handles the case of two parallel developments, both changing the same package in orthogonal ways. As smart as it can be, however, git does not know about the mass of the Higgs or how to resolve conflicts where two people modified the same line in different ways. This latter case is however automatically detected by GitHub, which will point out that your changes cannot be merged automatically.

This tutorial will show you how to resolve the latter problem using the git rebase command and several CMS-specific wrapper commands.

Rebasing means changing the base for a group of commits. The most general way to use the git rebase command requires three pieces of information: the new base, the old base, and the branch to be rebased. The old base is the latest commit before the new changes in the branch. Both of the bases can be specified as branch names, tags, or commit hashes (branch names and tags correspond to labels for commit hashes in git).

The git rebase command takes the new changes from the branch, which were previously made on top of the old base, and applies each commit, one by one, in order, to the new base. The rebased commits will have different hashes than the old versions of the commits, because the history (and potentially the content) has changed. To visualize this process, consult the following diagram: 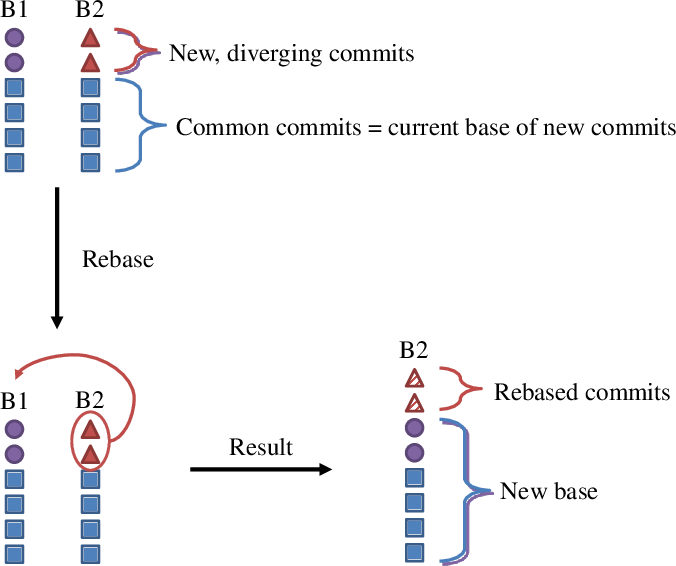 If there is a conflict when applying a certain commit during the rebase, git will pause so you can edit the conflicting files to resolve the conflict. You can then continue the rebase. (An example of this process will be shown in the tutorial.)

The advantage of rebasing to resolve conflicts is that it preserves a linear history. Your development in your topic branch is restructured as though you had made your changes after other developers made their conflicting changes. This reflects the order in which features get merged into the official repository, and puts the onus on developers to keep their topic branches up to date.

One potential downside of rebasing is that it can cause difficulties for others who may have built topic branches on top of your branch (due to rewriting the branch history). If you are working collaboratively with any other developers (e.g. testing features privately before submitting a PR), it is polite to let them know when you are going to rebase, and keep a backup branch with the old history in case they need it.

If something goes wrong during the rebase, you can restore the previous state of your branch using git reflog (see the FAQ for more info).

Please make sure you are registered with GitHub and that you have provided them a ssh public key to access your private repository. For more information see the FAQ. It is also a good idea to make sure your CMSSW_GIT_REFERENCE variable is set appropriately (again, see the FAQ).

We will also assume that there is a non mergeable branch called Unmergeable8025 in the repository of the user kpedro88.

First, let’s create an area for the latest / greatest CMSSW available. This will be your new base.

Rebasing is an entirely git-based operation. Generally, it is not advisable to try to compile or run code in the middle of a rebase.

Very important note: NEVER use git cms-merge-topic to resolve conflicts in a pull request!!! This can introduce hundreds of duplicate commits. Release and package managers have the right and the responsibility to reject such broken pull requests immediately.

Let’s use the simple cms-rebase-topic command to deal with the unmergeable branch in your working area.

which means that the file Configuration/StandardSequences/python/Mixing.py has changed in conflicting ways in the branch kpedro88:Unmergeable8025 and the the release CMSSW_8_0_26.

Resolving conflicts during the rebase

The conflicting changes can be viewed by using the git diff command:

As expected, the file that has problems is Configuration/StandardSequences/python/Mixing.py. Conflicts are marked using merge conflict markers, (the same way they were on CVS): the <<<<<<< and >>>>>>> delimiters, and the ======= separator. The version on top (marked with HEAD) is the one which is available in our work area. The version on the bottom (marked with the commit message, “add new PU scenario”) is the one which belong to the topic branch we are trying to merge. In this particular case, we want to keep both new lines. Therefore, we make the changes via our preferred editor (nano used here for simplicity).

Once we have done it, we can do git diff again to see the changes:

We can now add our changes and continue:

This means the commit entitled “add new PU scenario” has been modified to avoid the conflict in the new base release CMSSW_8_0_26.

If you look at the current list of branches with git branch, you will see that a branch named “…_backup” has been added by default:

This backup branch contains the state of the branch before the rebase was done.

The temporary branch is now up-to-date with the current release. This means that it is safe to checkout the dependencies and make sure the code compiles. (Depending on the extent of the conflicts, you may want to rerun some of the standard PR tests locally.)

Finally, you can push the rebased branch to your remote fork, which will automatically update your pull request. (Note that the -f option is necessary, because rebasing rewrites the history of the branch.)

Warning: sometimes, git gets confused while rebasing and checks out other packages (which you may not actually need to recompile). The easiest way around this is to rearrange the last few commands: rather than doing git cms-checkdeps -a and scram b, skip to git push -f my-cmssw Unmergeable8025. Then, create and setup a new working area:

Here, you do a “safe” checkout, which automatically checks out any dependent packages as well.

Recovering from a bad rebase (or merge)

If something went wrong during your rebase, or if you accidentally used cms-merge-topic and your PR has been rejected, you should go back to your working area and use the automatically-created backup branch:

where [branch] is the name of your branch.

Once you have recovered the previous state of your branch, please follow the approved procedures as outlined here.

If you want access to options of git rebase that are not provided in git cms-rebase-topic, you can use git cms-checkout-topic -u and then use the git rebase command. (The -u option avoids calling cms-checkdeps before the branch is rebased.)

If you find that the rebased code does not compile or run correctly because of a mistake during the rebase process, you can make an additional commit to fix the problem. However, advanced users may instead try the git rebase --interactive option, which allows you to edit the existing commits. This means that you can solve any problems in-place and preserve the linear development history.

The above is all great stuff but I need a quick recipe!

This is the most concise recipe to rebase your branch, resolve conflicts, and update your PR. You can also use this recipe to move to a new IB. (If there are no conflicts, the cms-rebase-topic command will automatically call cms-checkdeps -a when it finishes.)

Any pull request for a new feature must first be submitted to the open development branch (always the master branch). Some features may need to be backported to older CMSSW versions, e.g. to fix bugs for data-taking or add options for MC production.

If we needed to backport the change from the above example branch kpedro88:Unmergeable8025 to the CMSSW_7_4 series, the exact same rebasing procedure can be followed. The “new base” in this case is the latest release CMSSW_7_4_16 (instead of CMSSW_8_0_26, as we used in the example). That’s right; rebasing can work in any “direction”.

However, it is necessary to provide more information when porting a PR between branches, since different branches may have different commits beyond the changes you have made in your topic branch.

In the case of a backport, you should make a copy of your original topic branch and rebase the copy, because you will submit a separate PR.

Notice that you have to specify the “old base” of the branch with the --old-base (or simply -o) option. This does several things:

Remember, [new base] and [old base] can be commit hashes rather than tags. If you are working in an integration build (IB) that has expired (so the tag is no longer available), or if you lost your original working area and forgot which release was your old base, you can use git log or the GitHub history view to find the hash of the latest commit before your changes, and proceed normally.

There are a few cases where you might want to individually apply commits from one branch to another branch, rather than rebasing. (Other cases may exist as well.)

You can accomplish this using the git cherry-pick [hash] command. [hash] is a commit hash; it can also be a list or range of commit hashes (which will be applied in order).

If you’re updating a backport, you may need to use git fetch my-cmssw in your backport working area to inform the local git repository about new commits you have added in your remote. You can also add a remote pointing to someone else’s fork of CMSSW if you want to cherry-pick from their commits.